If you’ve never visited Eastern Europe, Slovenia is the perfect gateway country into this region of the world.

Ranked as the 7th most peaceful country in the world by the Global Peace Index, Slovenia is sure to calm the nerves of any family looking for a fun and safe camping holiday. Outdoor enthusiasts will be in awe of this small country, considering over half of the country is protected land consisting of forests, mountains, lakes, waterfalls, and beaches. Dine like a local, taste test wine, honey, freshwater fish, pasta, and potatoes in various shapes and forms. Participate in the Kurentovanje, or the Kurent Carnival: a festival where Slovenes parade around wearing traditional costumes in a ritual to “scare away” the winter. With all of these fun festivals, delectable foods, and stunning natural spots, Slovenia is a well-kept secret in Eastern Europe that you simply cannot miss. 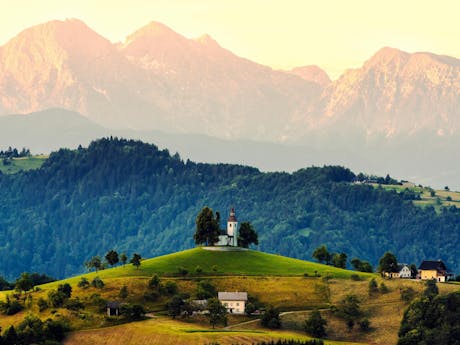 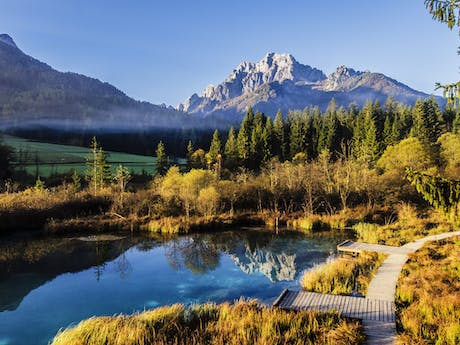 Slovenia is a beautiful country in Eastern Europe that borders Italy, Austria, Hungary, and Croatia. This country is about the size of the state of Massachusetts and occupies about 2 million people (Massachusetts has almost 7 million!). Over half of the land in Slovenia is environmentally protected. In fact, over half of the country is made up of forests alone. But Slovenia isn't just forests, there are many other terrains to enjoy in the country, such as mountains, plains, beaches, caves, and lakes. What about the climate in Slovenia? Near the coast one will experience a warm, Mediterranean climate, while in the Alps it is naturally cooler and more rainy in the summer with colder temperatures in the winter.

Slovenia is the only country in Europe that contains the Pannonian Plain, Karst, the Alps, as well as the Mediterranean. It has over 24 miles of the Adriatic coast. Another natural wonder in Slovenia are the waterfalls: there are 260 in the country, with Boka waterfall being the mightiest. A popular destination in Slovenia is the city and lake of Bled. Bled Lake is considered one of the most beautiful lakes in the world, with an island in the center that houses an old church. The Church on the Island has a bell, and the legend goes that if you ring the bell your wish will come true. Here on the lake, you’ll find Campsite Bled, with a prime location on the water. The largest lake in the country is Bohinj. Other than the lakes, tourists in Slovenia often flock to the mountains, more specifically Mount Triglav, the highest peak and national symbol in the country at 9,383 feet (2,864 metres) tall. Caves are a popular destination as well, especially the Skocjan Caves, famous for their limestone, or karst interior. As you can see, Slovenians take their nature very seriously, especially considering they are rated the 5th most environmentally friendly country in the world.

On the 25th of June in 1991, Slovenia declared its independence from Yugoslavia. Since then, they have become one of the most peaceful countries in the world. This split has also caused the national language to be an archaic wonder. In fact, Slovenia has been a meeting point for the Slavic, Uralic, Romance, and Germanic cultural and linguistic regions, making it the most complex meeting area of languages in Europe. The national and official language is Slovene (or Slovenian in English), but there are almost 50 different dialects of Slovene! The two next minority languages are Italian and Hungarian. Other than learning new languages, Slovenians spend their time playing handball, sipping on wine with their friends, white-water rafting, and beekeeping. Yes, you read that correctly… beekeeping. It is said that there are over 90,000 beekeepers in Slovenia, and considering its low population of 2 million, that puts about 1 in every 22 Slovenians in a bee suit and mask. However, honey isn’t the only delicacy in Slovenia. One of the most important parts of any culture is the food! Although a relatively new country, the Slavs go back thousands of years, taking culinary inspiration from the Mediterranean, Alpine, and Eastern European influences. So, think of gnocchi, barley, cabbage, and pizza. However, most traditional Slovenian dishes include flour, barley, or buckwheat as a base, as well as cabbage and potatoes.

If you’re more interested in the history aspect of the country, head to Ptuj, the oldest town in Slovenia. Inhabited since the Stone Age, Ptuj was built on Roman foundations. Ptuj is now referred to as a “museum town”, with as much history as culture. Definitely add this festival to your bucket list, for it is truly something unique to the country. Another famous sight in Slovenia is the Old Vine in Maribor, which is the oldest grape vine in the world. It has survived wars, fires, and infestations, but still produces 35 to 55 kg of grapes each year which in turn produces about one hundred bottles of wine. Although it is said that there is a vineyard for every 70 people in Slovenia, this is definitely the most famous vine in the country. Slovenia not only has the oldest vine in the world, but also the oldest wheel in the world. Dating back to around 3150 BC, this wheel was found in 2002 about 20 kilometres southwest of Ljubljana. Clearly, there is a lot of culture and history to be found in this Eastern European country. Will you make Slovenia your next holiday destination?

A traditional hearty dish of the Soca Valley region of Slovenia. Try out this dish using the fully-furnished kitchen in your tent!