Camping in Luxembourg: Holiday with Rent-a-Tent

Look no further, for this picturesque, international hub is Europe’s best kept secret in tourism! This country is known for its gorgeous hiking destinations, decadent sparkling wines and its mix of cultures and nationalities. Luxembourg’s small size makes it easy to get to all the destinations you wish to see, all while staying at your luxurious campsite. This country’s picturesque landscapes and temperate climate make it the ideal destination for camping! While you’re camping in Luxembourg, you’ll have to try and make the traditional Luxembourgish snack, Gromperekichelcher, which are potato pancakes with onion, parsley, egg and flour (check the left-hand column for the recipe). When you’re thirsty, have a sip of Quetsch, a traditional alcoholic drink made by fermenting plums! If you’d rather have a glass of classic Luxembourgish wine, you can’t miss a stop at Restaurant Chiggeri in Luxembourg City, where you’ll find the longest list of wine options out of any restaurant in the world. There are endless things to do in the beautiful Duchy of Luxembourg and all within close distance! Just choose your accommodation, arrival and duration of your stay. Now you’re one step closer to the perfect Luxembourgish holiday! 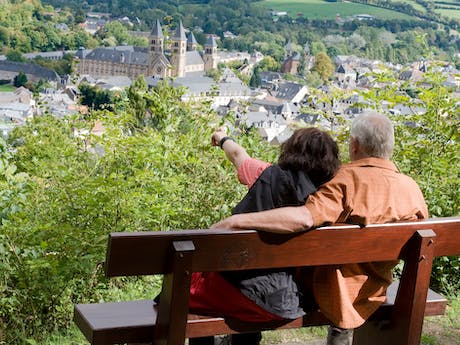 Luxembourg is about the size of Dorset county in the United Kingdom and smaller than Rhode Island in the United States! It is a modest country wedged between Germany, Belgium and France, at only 999 square miles (2586 sq. km) in size. Did you know that most Luxembourgers are at least trilingual? This could be due to almost half of its permanent residents being foreign! Popular languages spoken by locals are Luxembourgish, German, French, English and Portuguese. Additionally, almost half of the workforce in Luxembourg commutes from another country. Why is this so? Well, many reasons: Luxembourg is the wealthiest country in the world according to its GDP and the median salary is over $100,000 USD. This country also has the highest minimum wage in Europe, and second highest in the world (Australia being the first) and to top it all off, Luxembourg has the least expensive petrol in the EU! That might be why Luxembourg has the highest rate of car ownership in the world, as well. You will feel at ease in this country, for it is known to be one of the safest countries in the world, with only two jails in the entire country!

Don’t be fooled by this country’s small size, as Luxembourg has plenty of exciting and unique cities, activities and opportunities for adventure! One popular attraction is the 23 km of underground tunnels in Luxembourg City, which were originally built by the Burgundians in an attempt to conquer the city in 1443. Not only did these tunnels harbor thousands of soldiers with their horses, but also housed bakeries, workshops, kitchens and more! Today, 17 km of the Bock Casemates Tunnels remain, with tremendous stairways and exceptional views of the city. Another great attraction is the Notre Dame Cathedral, where every Saturday at 11:00am, a free organ concert is given. In Clervaux, there is The Family of Man, which is an inquisitive exhibition of 503 black and white photographs by 273 artists, from 68 countries. If you pass through Luxembourg’s “Little Switzerland”, you must walk the Mullerthal Trail, for a beautiful hike awaits you. For art and history buffs, stop by the MUDAM Modern Art Museum or the National Museum of Art and History in Luxembourg City, where you’ll find five floors of free access. Whatever you interests, you can fill your days with culture, nature and remarkable memories, catered to your family!

Luxembourg provides some of the most comfortable summer weather that Western Europe has to offer. Renting a car is a great option, for you can participate in diverse activities and events all over the country! It’s small size, mild climate and cultural diversity makes it the perfect camping destination for families of all stages and ages. This vacation in Luxembourg is sure to be the best yet. Happy holiday!

2) Put them in a cloth and press them.

3) Chop the parsley, shallots, and onions, and mix them in.

4) Add the beaten eggs to the mix.

5) Salt and pepper to taste.

6) Prepare with the flour.

7) Heat the oil in the pan until very hot.

8) Form flat cakes out of the potato mixture.

9) Fry them in the oil until golden brown on both sides.